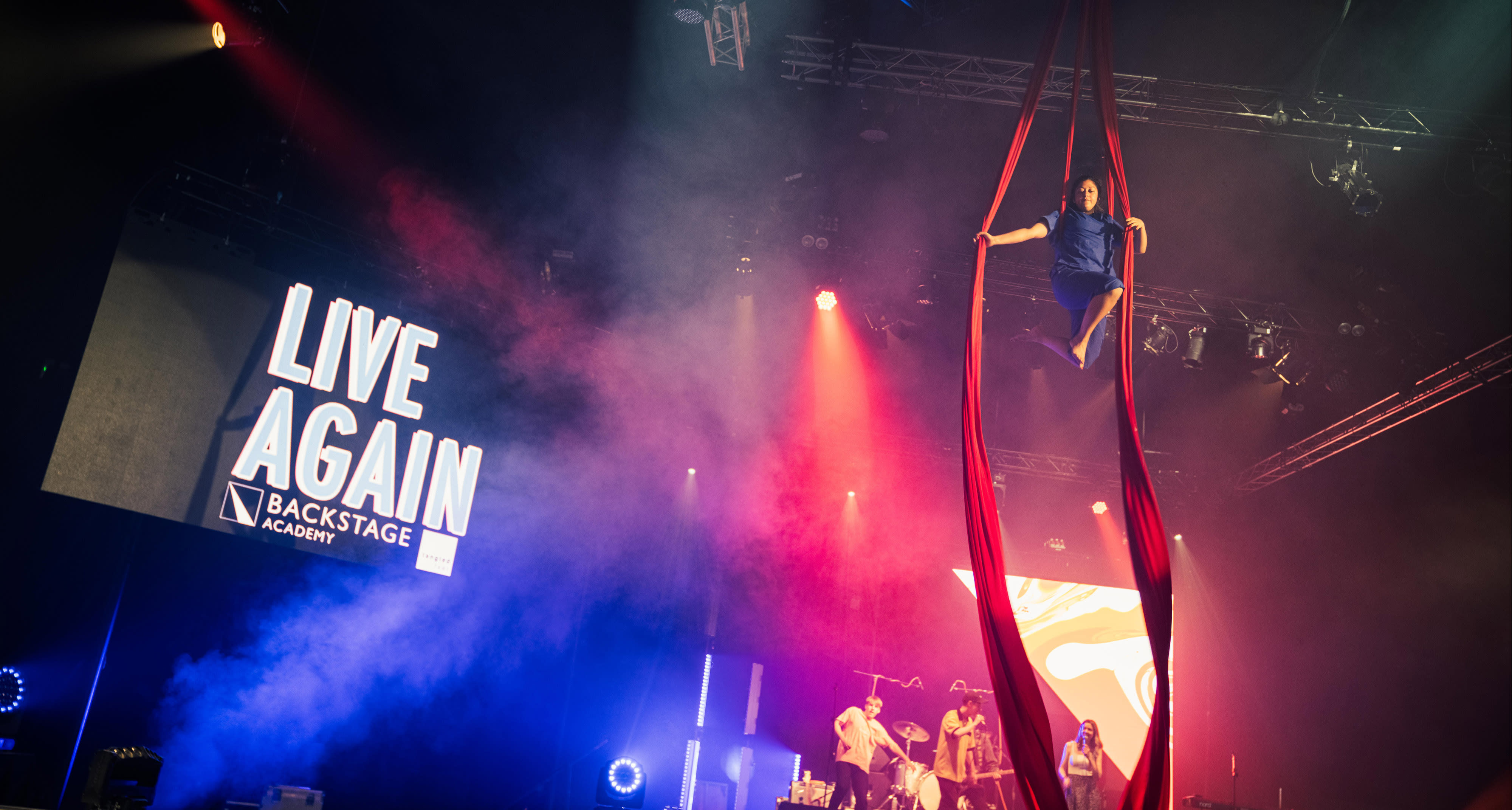 The day has finally come. Our final, Final Major Project showcase and this one’s a biggie. By far, one of the largest, most ambitious student projects we have ever seen at Backstage. This event included teams and crew members from across our student cohort, headed up by our fantastic third-year students. We give you - Live Again.

For our final year students, the versatile skillset learnt studying over the COVID-19 pandemic has strengthened their resilience and eagerness to reinvigorate the live events sector. The experience of adapting through adversity has set them up for the best chance of success upon entering the industry; driven to cater to the UK’s pent-up demand for live events post-pandemic.

For Backstage Academy’s Live Events Production course leader, Johnny Goodwin, this year’s projects are significant – not just because they serve as a capstone contribution to the students’ third-year final grade – but because the 2021 themes address the feasibility of the industry’s survival post-COVID.

You could say there is something primal in the coming together of people to enjoy culture through a shared experience – whether that’s at gigs or in theatres. These Final Major Projects from our students have really brought that to the fore, demonstrating not just the skills learnt, but more significantly, the importance shared experiences have on the human condition.

From day one, our students are fully immersed in the industry, working with some of the sector’s biggest names, using best-in-class equipment, in state of the art studio spaces, and working closely with practitioners whose day job it is to create the most breath-taking live experiences.

Our students’ Final Major Projects have been undoubtedly big, ambitious productions this year. They serve to push the students’ skillset to the next level – putting into practice everything they’ve learnt along the way with us.

We were thrilled to get a sneak preview of Live Again in their final dress rehearsal before the first showing and live stream. Before showtime, we spent some time with third-year BA (Hons) Live Events Production student, Ross Wickison, who walked us through the production process - on a mammoth scale! 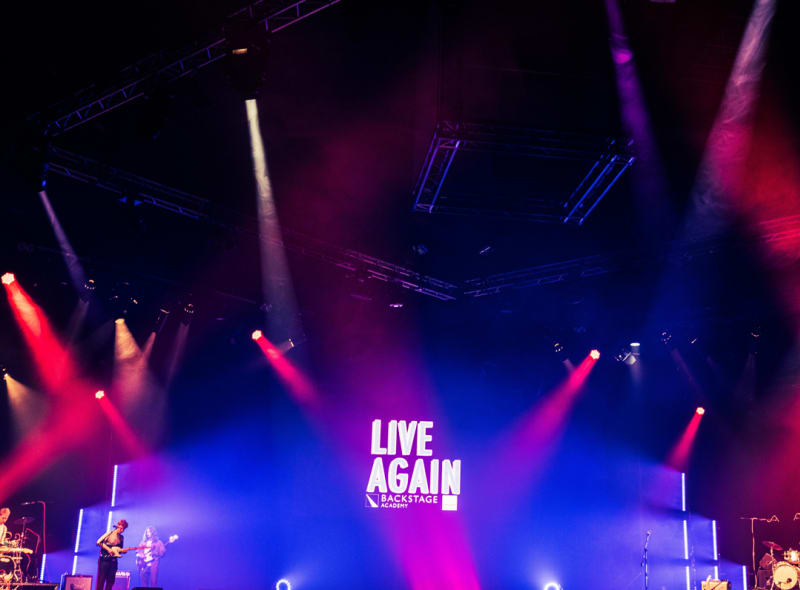 The Live Again project was a theatrical performance telling the story of live events – from before, during and hopefully post-COVID – through actors and musical performances, bringing together lighting, visual and sound design and effects to narrate each performance.

We held the show in Studio 001 – Production Park’s biggest studio – with a 40x40m footprint and 16m high rigging gantry, which has the ability to hang 110 tonnes of gear from it. It’s been excellent to have an opportunity to work creatively with a huge space like that. One which is usually a commercial facility used by the likes of Kylie, Robbie and Muse.

The event starts off with a live music set-up, in a Hootenanny-style with a live MC, but gradually becomes a pastiche on the impact the pandemic has had on the live events industry; with the MC becoming a central character & protagonist. You see her world presenting a major music event upturned, to her being stuck in her room crossing off future dates and looking at how she coped with the turmoil. 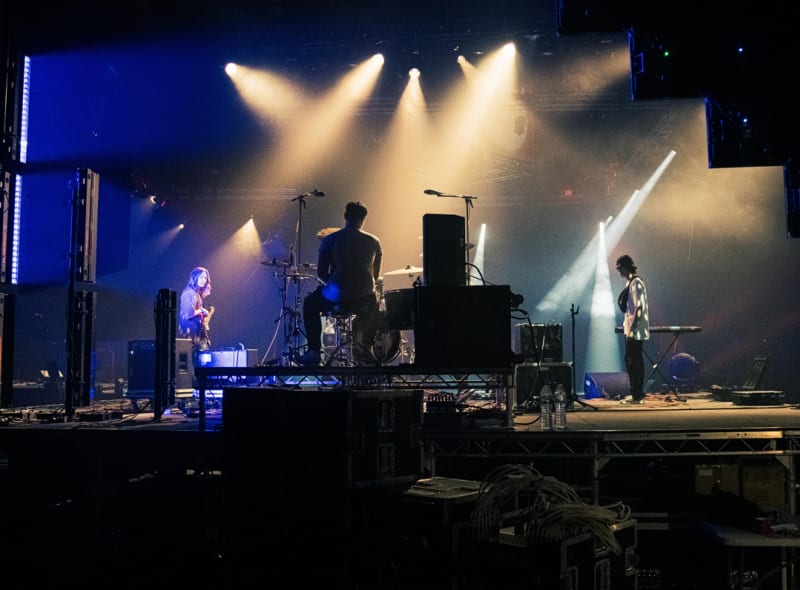 We utilised a huge amount of industry-leading tech – from LED walls, lighting, line arrays and 3D sound – but also some automation, using computer-controlled electric hoists. We even created a cuboid structure with a Hologauze projection, which drops out of the main rig, and flies over the MC, representing her confinement during COVID-19.

A running theme in all our Final Major Project showcases has been to pay thanks to our incredible industry partners. It is absolutely undeniable that without the support of these world-leading companies and creative individuals - these spectacular events would simply not be possible. Our students recognise the unique experiences that they are able to have for themselves, but are also able to create in their event productions, which are made possible by the best-in-class equipment and technology at their fingertips.

For Live Again, the whole Backstage kit and caboodle was utilised.

First off, hoists by 4Wall, trussing provided by SIXTY82 and staging by Brilliant Stages were of epic proportions that not only bolstered a network of multiple different, high spec lighting fixtures from 4Wall, AC Entertainment Technologies and Martin Lighting but also supported variable speed automation technology & ziggurat shaped ROE Visual LED video walls. The safe installation of all this was overseen by Knight Rigging Services. The video walls were in three parts creating three unique staging and performance areas. Original video content was created on Hippotizer software and played back in real-time via Green Hippo servers. 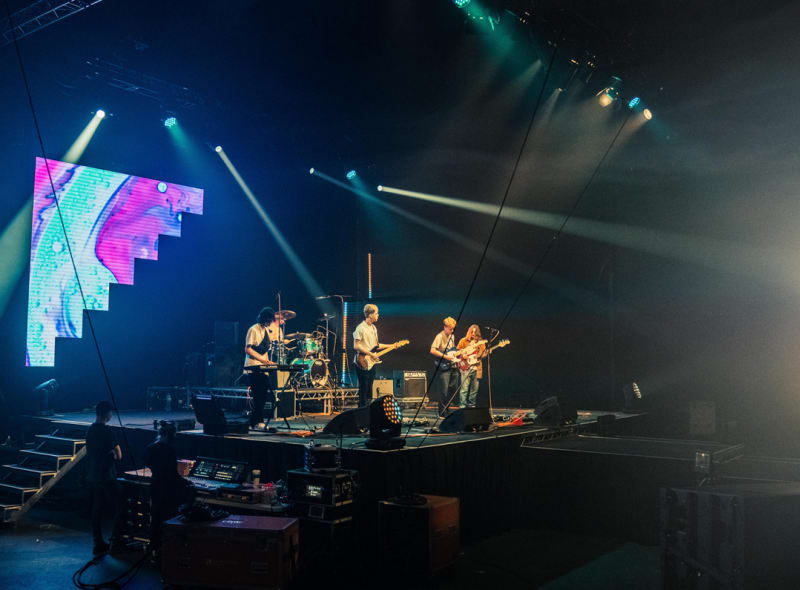 Next into all things audio. JBL VTX line arrays and subs were generously provided by Harman. Such a sophisticated system could not have been deployed correctly and safely without comprehensive training delivered by Ed Jackson and hosted by Adlib, who also provided all the cabling requirements, big thanks to the team!

Complex monitor systems were provided by d&b audiotechnik and KV2 Audio, controlled by not one, but two Soundcraft Vi1000’s. Most of the backline was generously supplied by our regular provider; STS Touring. A massive array of mics from our industry partners Sennheiser, Shure and Trantec ensured every sound and note was captured.

A whopping total of 128 lighting fixtures were comprehensively controlled via an Avolites Arena with a Tiger Touch II console on standby for the highly unlikely event of some kind of failure, arguably totally unnecessary but our students have been trained to plan for the unexpected. This isn’t the end of the front of house story; FOH sound via a Soundcraft Vi7000 and a d&b audiotechnik 360 Soundscape system replayed complex sound effects via an Allen & Heath dLive console. A second dLive console was also deployed as the whole event was streamed live for those who couldn’t make the event in person. Cameras and mixing by Blackmagic cameras and console. 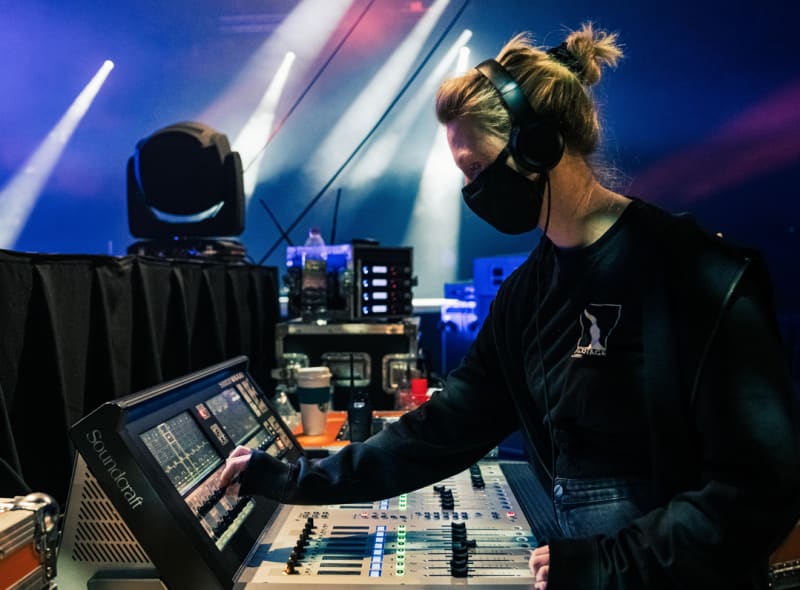 A Kinesys variable speed hoists system was deployed to lower the ‘lockdown room’ onto the stage, thanks again to Brilliant Stages, not only for the equipment but also the specific training our students required, delivered coincidently by TAIT’s Head of Automation, ex Backstage student Tom Richter. This virtual room was mapped and spectacular custom graphics by the students were projected onto the gauze room using three of our Epson 12,000 lumin projectors.

Events like this cannot happen without great comms and Riedel generously provided us with their Bolero system for all the Backstage technicians. 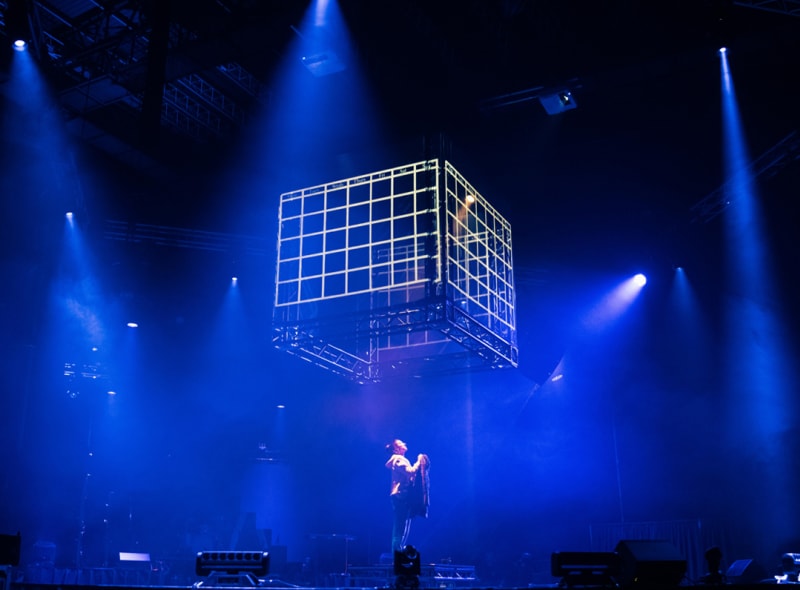 We managed to catch Ross for a quick final word before taking our seats for what was the first live event experience for so many of us in over 18 months. And what an incredible experience it was!

For a group of final year students, we’ve been really ambitious in producing an arena-sized show like this. In total, we had 128 fixtures, 3km of power cabling and 1km of data – these are the sort of numbers you wouldn’t even see on an arena-sized show! For us, it was a big learning curve and amazing opportunity; and one that makes you realise how much goes into a show of this scale and size.

We all had our roles within the production – across technical and broadcast teams – but we also worked closely with Tangled Feet; who served as our technical directors and assisted in the story-making whilst also giving us more experience working with a client.

Although we were planning and designing the event, we needed the content element from the talent, and it’s been great to have Tangled Feet as an amazing partner. From a technical perspective, it truly was a spectacular show, but it was intertwined with a poignant message of the importance of live events."

And they weren’t wrong. Phew!

A huge congratulations to all our third-year students. For your passion, creativity and downright determination to complete your degrees. You are all incredibly talented and should be truly proud of your achievements! Next stop - graduation!

Live Again was a project by:

And that's a wrap! Just to top things off oh so nicely, why not watch the Live Again showcase film!